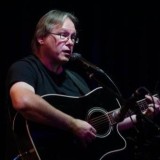 Ron Hayden has been a singer songwriter/guitarist who has been playing and singing his own music for over 30 years. He blends the traditional country sounds from his early childhood with the heartland rock sounds of his young adult life and presents it in a musical style that is all his own. Ron Call's it 'HEARTLAND MUSIC', common man music because it is genuine and heart felt. A sound for the future that keeps a hold of it's past. He played all over the Chicago Metro area while growing and living there. Earning a spot as one of Reverbnation’s top Americana artists.
Over the years he has released a CD of original songs entitled “Hard Times in The Heart Land” on CDBABY which has had buyers from around the word. Songs from the CD have received airplay on many radio stations. The songs have also generated some interest in Nashville with “Wanted Man” getting consideration for a Major Movie project. You can find his songs on Spotify, ITunes, Amazon and all other streaming services. You can find his music videos on YouTube. Ron's single release "The Story of Charlie” in 2017 gained international attention receiving numerous awards from Canadian internet Radio stations. Was a nominee for traditional country song of the year by the World Songwriters Association and used the song to try and help raise money for Veterans in need.
The song has received critical acclaim from the critics at ReverbNation and has put Ron on their list of Artists they want to help develop which is a level few Reverbnation members obtain. You can purchase his songs at CDBABY and view his music page at ReverbNation. Ron also became a member of the International Singer-Songwriters Association (ISSA) in November of 2017.
Now living In Powdersville South Carolina Ron Hopes to build his own recording studio and continue to write and hopefully release a 2nd full length album soon that carry on his Midwest roots country/rock common man feel.